Psychedelic mushrooms have grown immensely in the public consciousness in just the past decade. Johns Hopkins, NYU, Maryland University have all had major studies and researching the magic fungus. Whether it is the research of deep "trip" sessions for PTSD or breakthroughs in life or the benefits of microdosing for everyday use, the impact of psilocybin is here to stay.

I've always been interested in mushrooms of all kinds. They can be the bridge between decaying matter and the restart of life. They can give users immense health benefits both mentally and physically. The benefits of psychedelic mushrooms are elusive in the fact that they are not easily obtained. If you want to do something right, do it yourself. This is meant to be an introductory guide on cultivating your own fungus.

Order desired syringes from mushrooms.com. Golden teacher or B+ varieties work best if starting out. If you live in a hot climate or the package will sit in a mailbox make sure to receive the package as soon as you can to keep the spores alive. If you live in a very cold climate, get the warmer option at shipping on the website to keep the spores from freezing. Once you get the syringes delivered, prep can begin. You can keep the syringes in room temp but will last for months longer if kept in the fridge. Just don’t let them freeze.

Prepping jars
Take a hammer and a nail, take the lid off and puncture 4 holes equally spaced apart through the top of the lid. 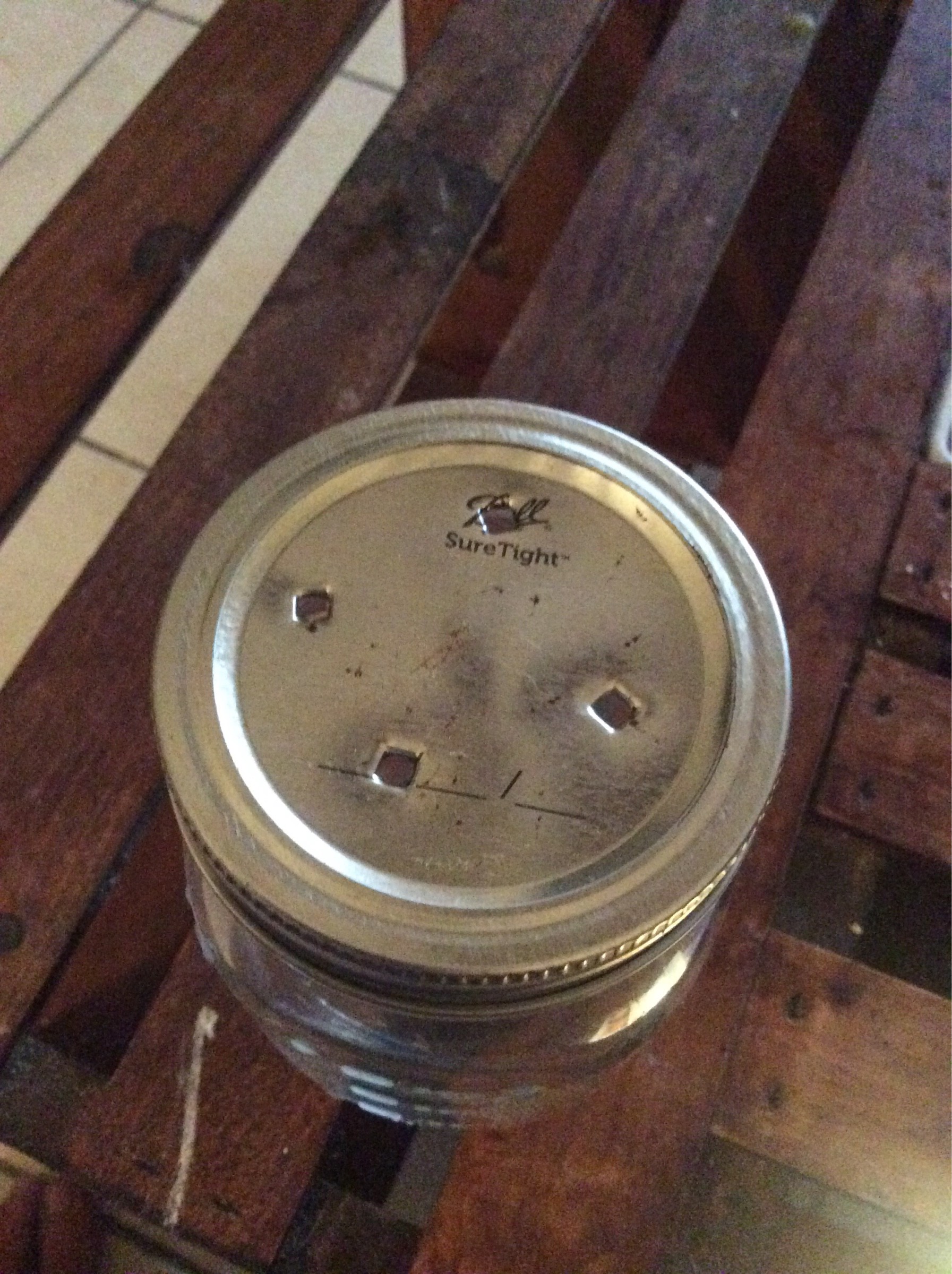 This guide will be based on prepping six 1/2 pint jars. Measure 4.5 pints of bird seed, there some extra just in case. Put bird seed in bucket, continuously rinse the bird seed and run through strainer until the water runs clear. Remove the sunflower seeds that float to the top. Don’t need to remove them all, just as many as you can get. Run your hand through the bird seed to thoroughly mix up sediment. Takes five or more soaks. Once the water is clear, fill the water above the WBS and dump a pot of coffee in, put on lid and allow to soak for 16–24 hours.
After soaking period dump water out, bring a pot to simmer, not boil, soak WBS in hot water for 30 minutes. After that let WBS sit in strainer for 15 minutes to let as much water drain out, mix around the WBS a few times with a spoon. Then spread out the WBS, press a layer of paper towels over it,
getting more moisture out of it. When touching a paper towel to the WBS there should barely be any moisture on the paper towel. Then moisture content will be proper.
Fill jars 80% of the way full with WBS. Cover lids with aluminum foil. Put rack in pressure cooker, put jars in pressure cooker, fill with water no farther than halfway up the jar, shouldn’t be an issue with the rack. If you don’t have rack, put rags at the bottom so the jars don’t crack or overheat from direct contact. Pressure cook for 90 minutes at 15 PSI. If below 15 PSI do it for 105 minutes.After PC’ing jars, let sit in cooker for 30 minutes before removing. Let jars cool down for minimum 8 hours. In the tote.

Inoculating jars
Syringe, lighter, tote, micropore tape
Use the cleanest room you can sanitize, I use the kitchen. I clean all dishes, sinks, and the general area. Sanitize the work area with alcohol, sanitize the tote. 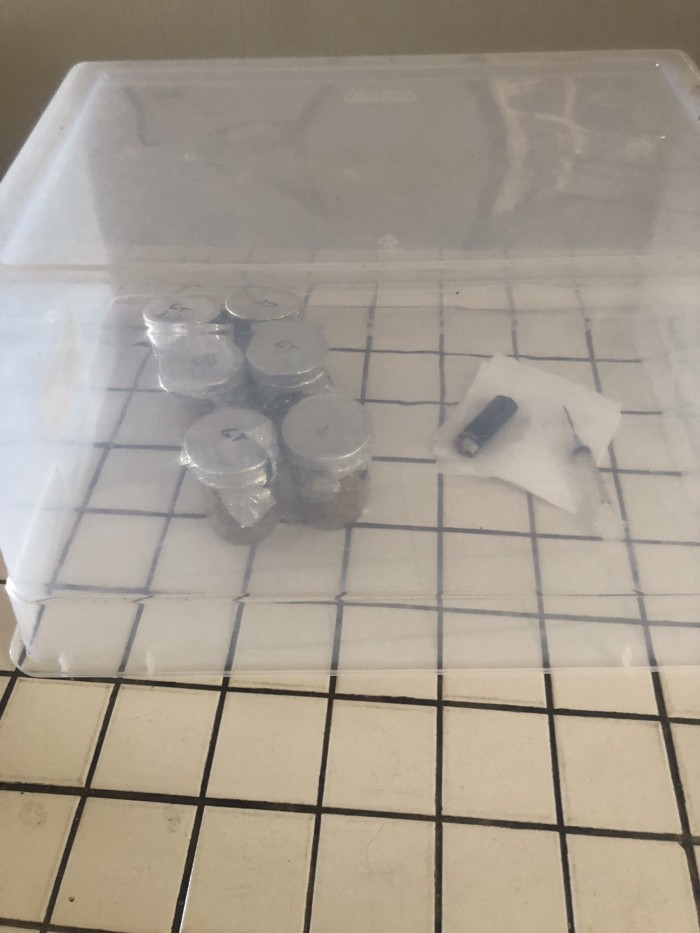 Take the syringe, with it sitting in one spot the spores will all be held together in a small ball. Before removing the syringe cap and putting on the needle, smack the syringe for about 2 minutes against the palm of your hand until the spores are evenly distributed through out the syringe. 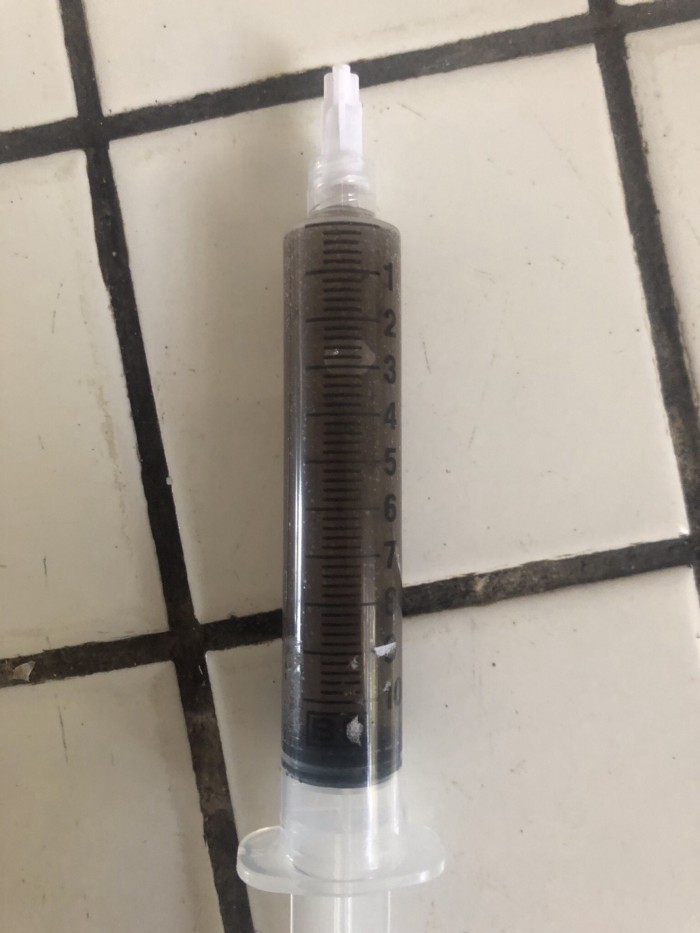 Remove the cap and install the needle. Have under the tote, the jars, the syringe, a paper towel and have the micropore tape outside of the tote.

Flick the syringe so any of the spores that have stuck together are broken apart again, it should only take a few flicks since it’s mostly broken up. Flame the syringe for about 8 seconds, be sure not to flame the plastic tip at the base of the needle. Place the needle inside of the folded paper towel. Rip two pieces of micropore tape and put on outside of the tote. By that time, the needle should be cooled enough to inoculate. Quickly remove the foil from a jar and put the syringe through one of the holes about an inch down the jar, have the point of the needle on the glass of the jar facing you. If inoculating six 1/2 pt jars with a 10mL syringe then disperse .4mL of spore solution into each hole. Do it as quickly as possible but don’t rush. As soon as the 4 holes are inoculated, take the two pieces of micropore tape and cover the holes, cover with aluminum foil. You can take the jar out from under the tote. Continue the process from flaming the needle till all jars inoculated.
Keep the jars in a tote in a temperature range of 75–80 degrees Farenheit. After 2–3 days small amounts of white mycelium will begin to grow down the jar. For 1/2 pt jar it should take 10–14 days for the jar to fully inoculate. After it is fully inoculated, wait another 3–4 days for the mycelium to strengthen.

They should look something like this after a week or so. After about two weeks they should be totally filled white mycelium, allow 3-4 more days for it to strengthen before transferring to tubs. 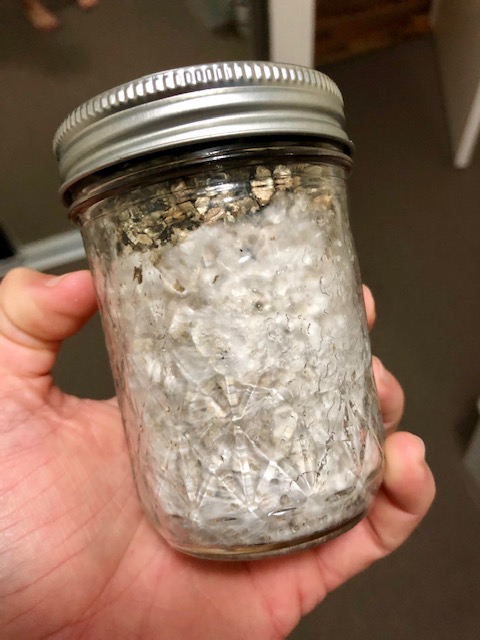 Sometimes the jars can get contaminated through uncleanliness or not properly sterilizing the jars. If there is discolored growth then abort the entire jar. Prepping the totes
Use the drill to make two 2inch diameter circles on each side of the tote. Use the drill to make an outline of the circles, use a serrated or hot knife to cut the plastic without splitting the surrounding plastic. Then fill the holes with enough poly fill to hold itself within the hole.
The middle tub is the technique I am describing. 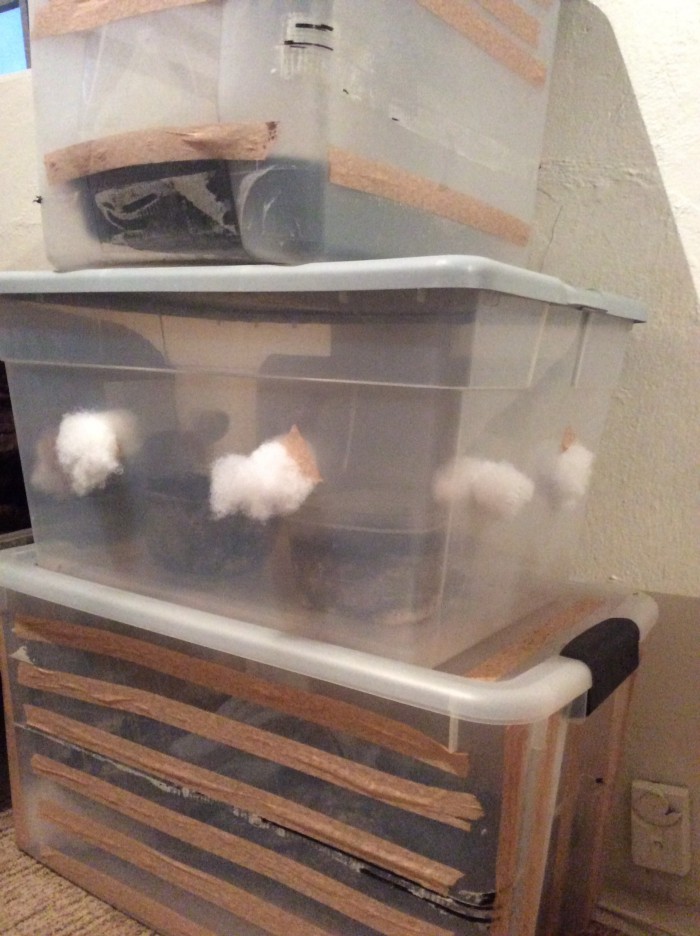 Transferring jars into trays
Ideally you can buy bricks of coconut coir in 250g increments because they’re easier to measure, if only larger take the brick of coir, cut off the proper amount coir with a saw or serrated knife or other tool. Use 300g of coir. Put in bucket, pour 2.5 cups of vermiculite in. Bring 7 cups of water to boil. Pour into bucket. Use fork or metal spatula to spread. coir and mix with vermiculite throughly. Put lid on the bucket and wait 6 hours for it to cool. In that time, clean out a closet or bathroom and sanitize it as best you can. Cover any drains if using a bathroom. Sanitize trays. Measure the volume of your tray, 1/3rd of the volume of the tray should be seed spawn.
After the 6 hours you can transfer it to the tub. Also to ensure the coir/verm mix has prosper moisture content it should be at “field capacity”, which means it can’t hold anymore water but it doesn’t leak water. To test and make sure it’s at field capacity take a handful of coir/verm in your fist and hold it, it shouldn’t be dripping, or should barely drip. Squeeze the coir/verm and a stream of water should come out, similar to squeezing a sponge. That ensures field capacity.
Take a sanitized spoon to clean out the seed spawn from the jars, break up the mycelium with your fingers till they’re broken up and spread across your glass tray. Mix in the coir/verm with the seed spawn till its evenly distributed. Take and spread a thin layer of coir/verm over the mixture so you can’t see anymore seed spawn. Place tray in a sanitized tote. The mono tub should stay between 60–75 degrees Fahrenheit.
Below is the final product. For scientific research purposes only, of course.